Perched on his bushy tail, Squilly is an effective attacker and somewhat resistant to special attacks.

Squail is especially adept at deflecting special attacks with his colorful tail. 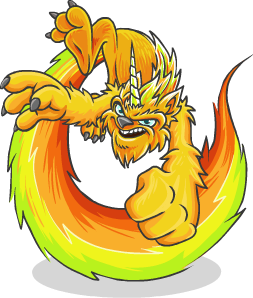 With his rainbow tail to distract opponents, the Squallard's attacks appear to come from seemingly nowhere.

A Squilly can be a really good answer to most of your Whirly problems, if you know how to use one. It's high Special Defense will make it quite able to absorb the furious winds of your opponent. A good idea is to make him learn Bop, to decrease your opponent Special Attack while still doing high damage. You could also augment his Toughen to level 2, so that even when hit by some Wind Blast, he'll be able to maintain high attack power. Give him a level 2 Prepare, and you might well have a guardian impervious to most attacks, resisting well to all elements but rock, and taking low damage from normal ones thanks to Toughen 2. Make sure your Squilly is strong enough to use these attacks without being killed first.

In short, the Squilly is almost perfect for defeating almost all Guardians, especially if you give it buff and/or debuff moves. The only sort of Guardian it might have problems with are Normal types, which, if you level it up reasonably, and perhaps spend one point on Defense, won't cause you too many problems.

Retrieved from "https://mysticguardians.fandom.com/wiki/Squilly?oldid=13625"
Community content is available under CC-BY-SA unless otherwise noted.