While it may not look tough, the Clayper's hide is comparable to any other Rock Guardian. 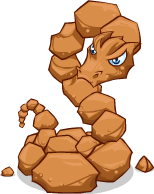 A Serpebble raised up off the ground should not be approached - the pose means it's preparing to strike! 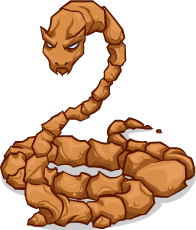 Fully grown Boalders can carve tunnels through solid rock at over 20mph, and tunnel through other Guardians at a comparable speed!

Clayper is uncommon in The Worm's Lair in The Northern Desert. It is the only location as of now where Clayper, or if you have a high enough trainer level, Serpebble can be caught.

It is said "A Serpebble raised up off the ground should not be approached" yet Serpebble is always in its pose.

Retrieved from "https://mysticguardians.fandom.com/wiki/Clayper?oldid=13456"
Community content is available under CC-BY-SA unless otherwise noted.